This work is a standard photographic/film industry ‘apple crate’ set (full, half, quarter, eighth) I think they are also used by movers in the UK, who call them ‘breakers’ or ‘brakes.’ The boxes are used for almost anything on set requiring something to be off the ground, but are most relevant in this situation in their use as a height enhancer. If Tom Cruise had publicity shots taken with Nicole Kidman, chances are they would have used an apple crate to make Cruise taller. Same with Bogart and Bacall, or Bruce Springsteen with Clarence Clemons (saxophonist). In all these cases, the reason the boxes are used is because of the basic, perhaps primordial hierarchy expressed by height in image-making. This betrays a concern that the men in those images would lose some power if they are portrayed as shorter than the other person. In this artwork, the crates are spray painted to separate the sets, and to heighten the totemic aspect of the form. They are painted on one side only, giving them a ‘face.’ They were used as supports while painting each other. The colours are mostly taken from the small icon Google uses on their <<waiting for something to happen>> icon. usually, you see two sets of colours, so there’s usually an easy to identify contrast. Standard spray paint colours are used to approximate the google colours, with small variations, like one would get from monitor to monitor.

Uses the sneakers as an economical way to work with a type of morphic serial imagery. They also record types of traces of use (mud, scuffs, paint, or wear.) In production (wearing the shoes for five years), I have separated the uses for each pair so that there is a distinction in the type of wear visible on the shoe.

The work is related to an art historical subject, which has been discussed by philosophers and theoreticians. This work studies the ‘character’ of used objects, or objects which seem to have been used in a particular way. Shoes are often discussed in this area of judgement.  It is a study in the graphic marks and evidence. The large group of shoes is a way of simultaneously observing use/ disuse and wear causes and what type of appeal or anti-aesthetic resides in this look.
The idea for having the shoes look as if they are dropping came from the anglo-American saying ‘Waiting for the other shoe to drop.’ Aesthetics are necessarily simultaneous with human action — even if this action is limited to ‘paying attention.’ However, typically, the actions related to an aesthetic event are more broad, ranging from thought and communication to wider social and political action. So in this way, the aesthetic is located as a fulcrum (between people) of agency in a broader sense. The wallpaper provides a picture which one can consider value judgement in relation to this exchange. 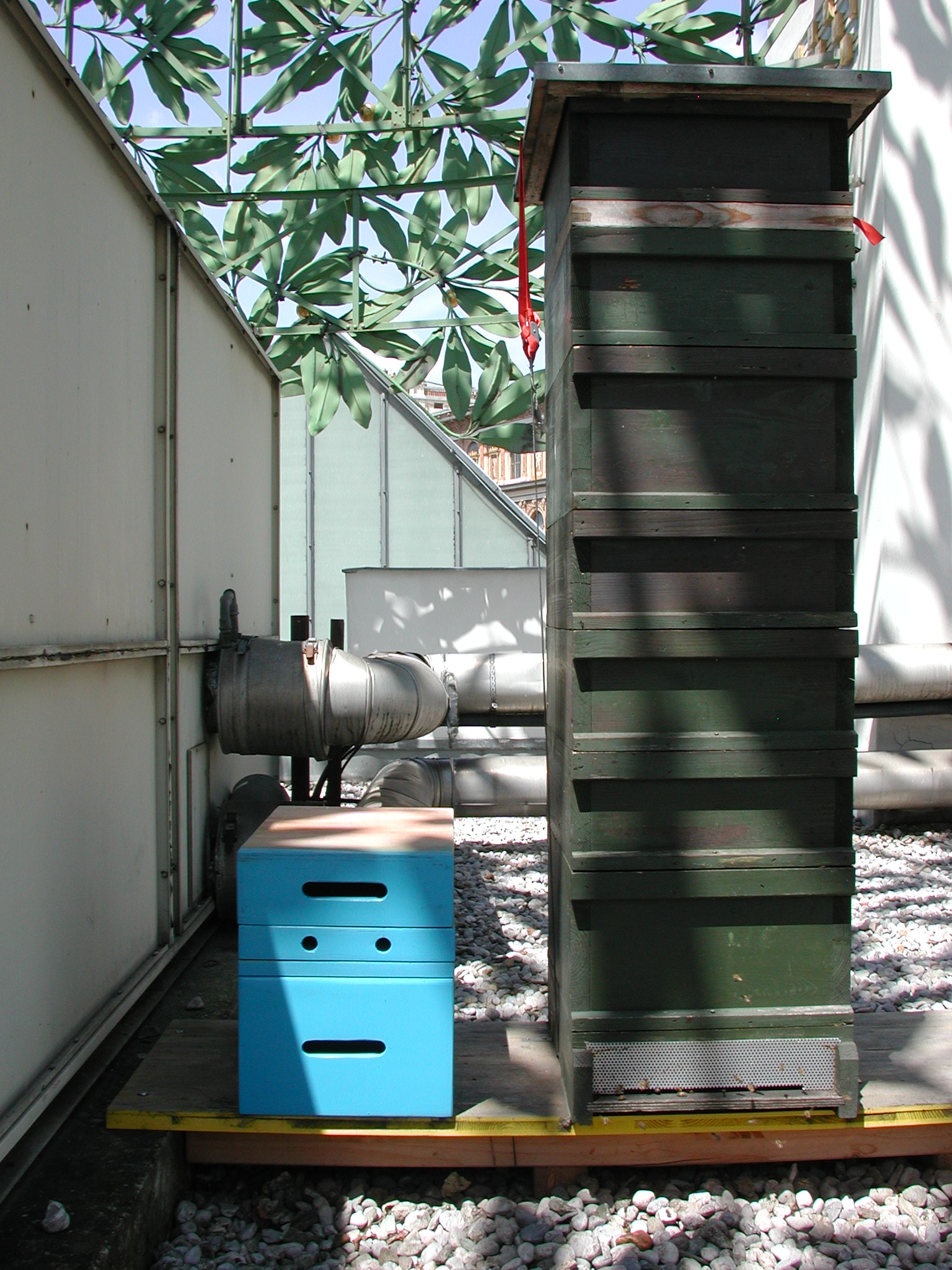 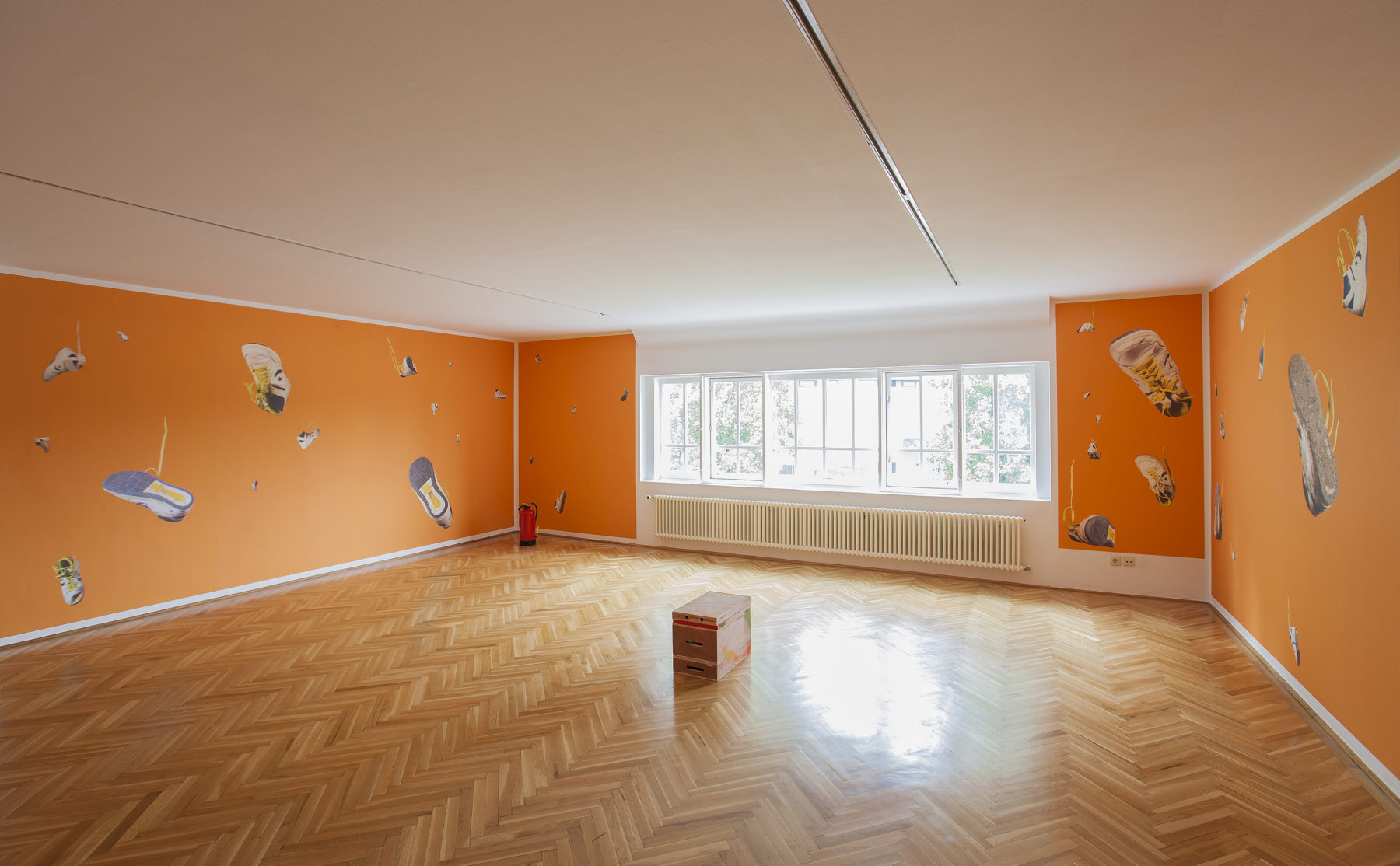 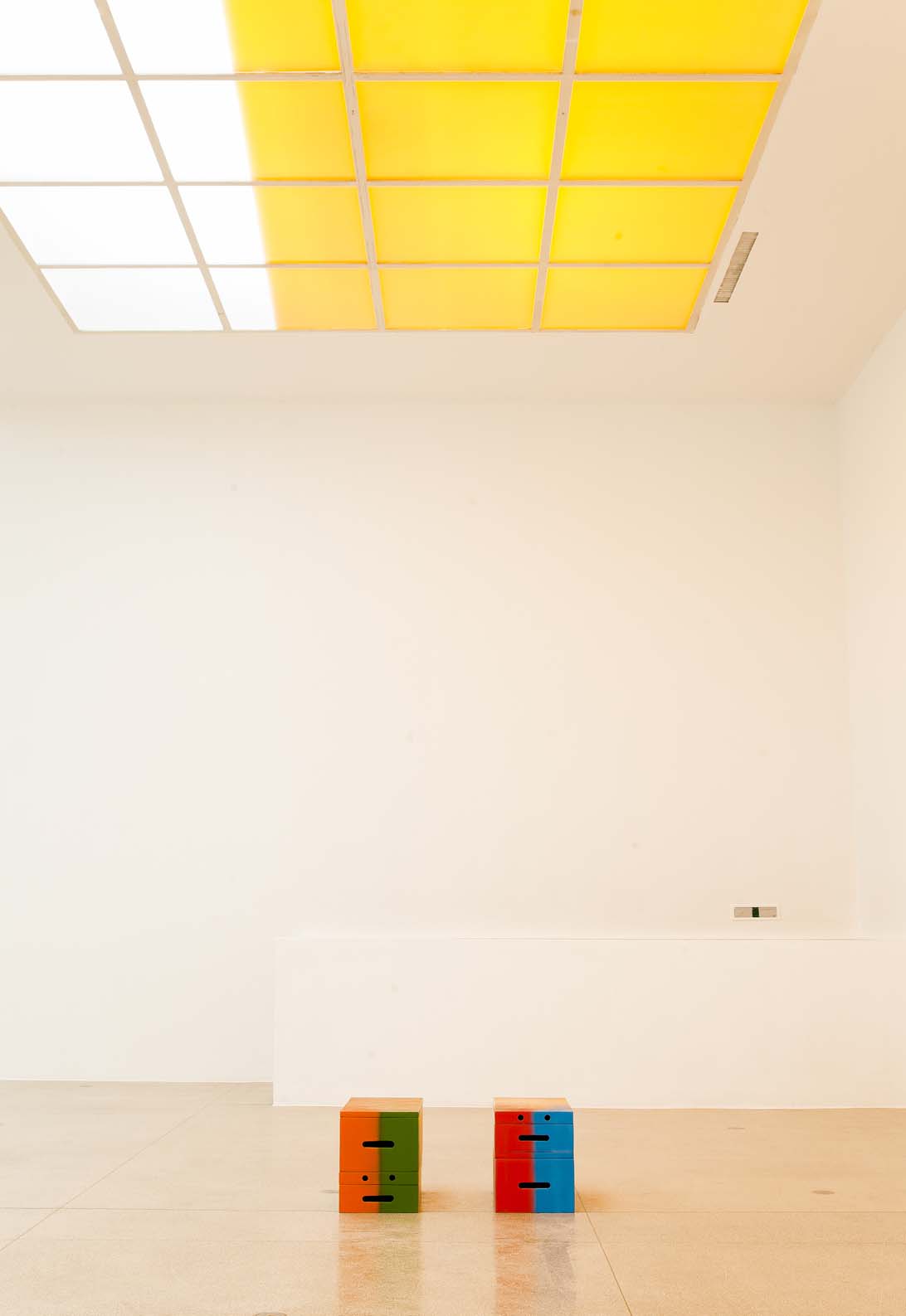 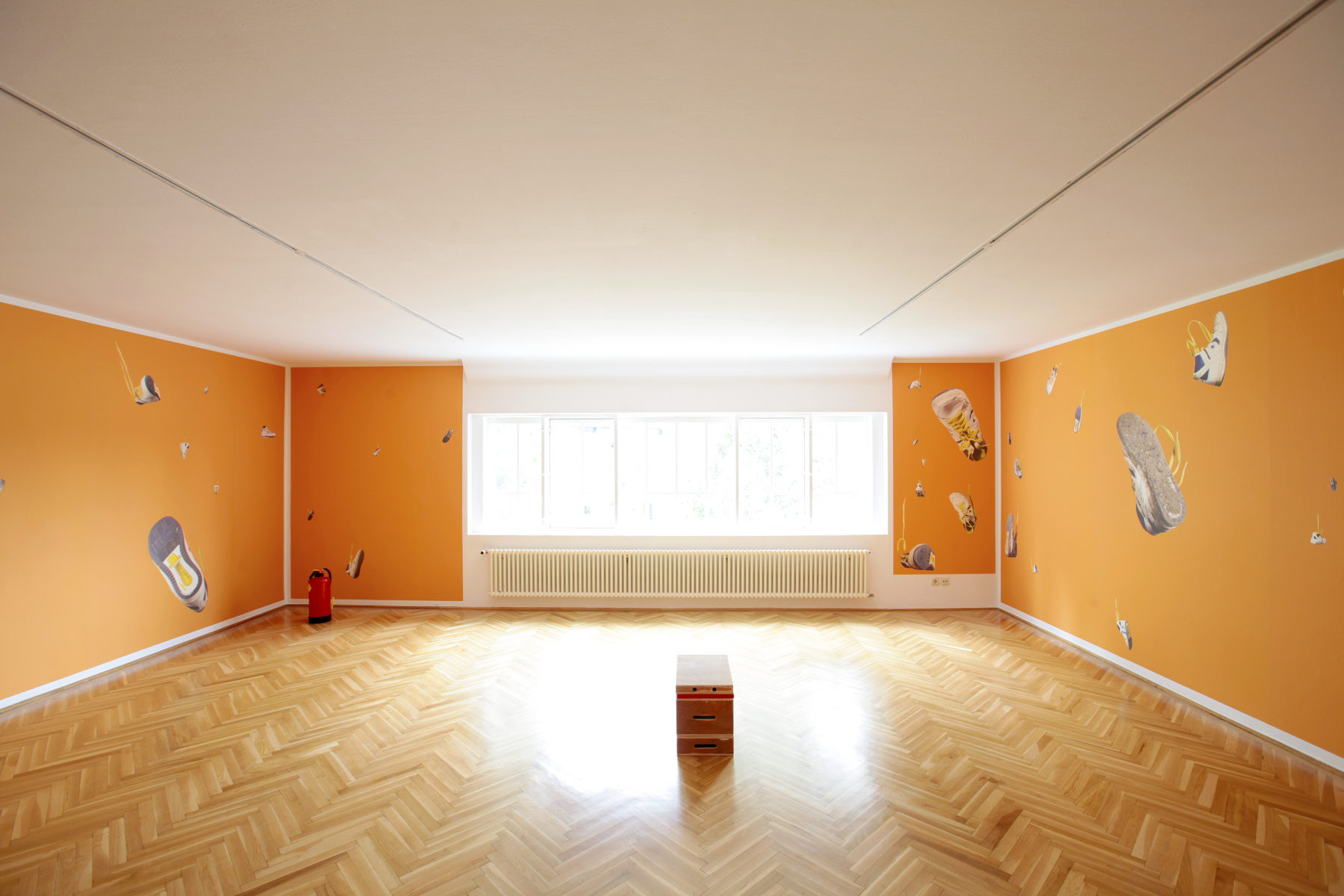 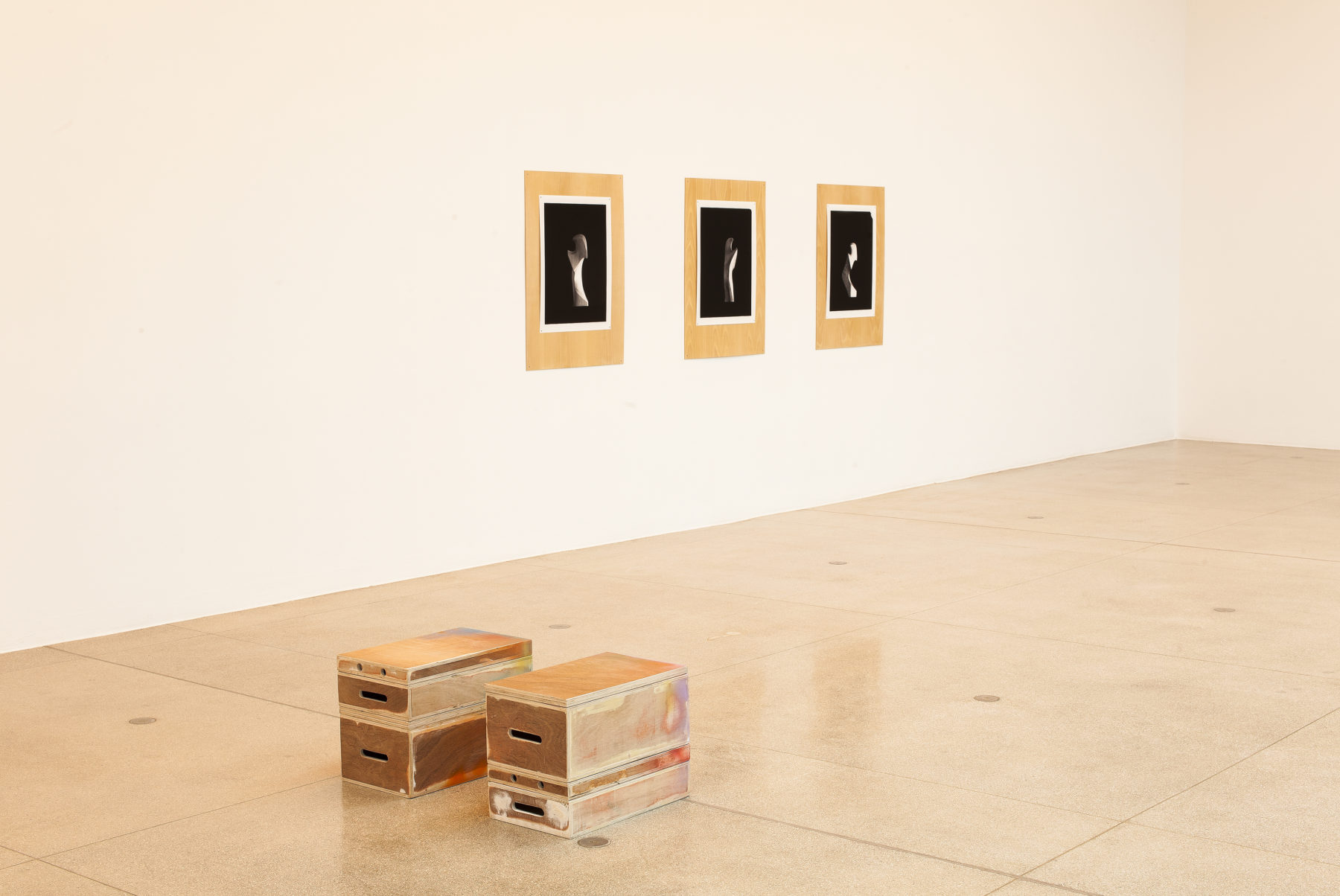 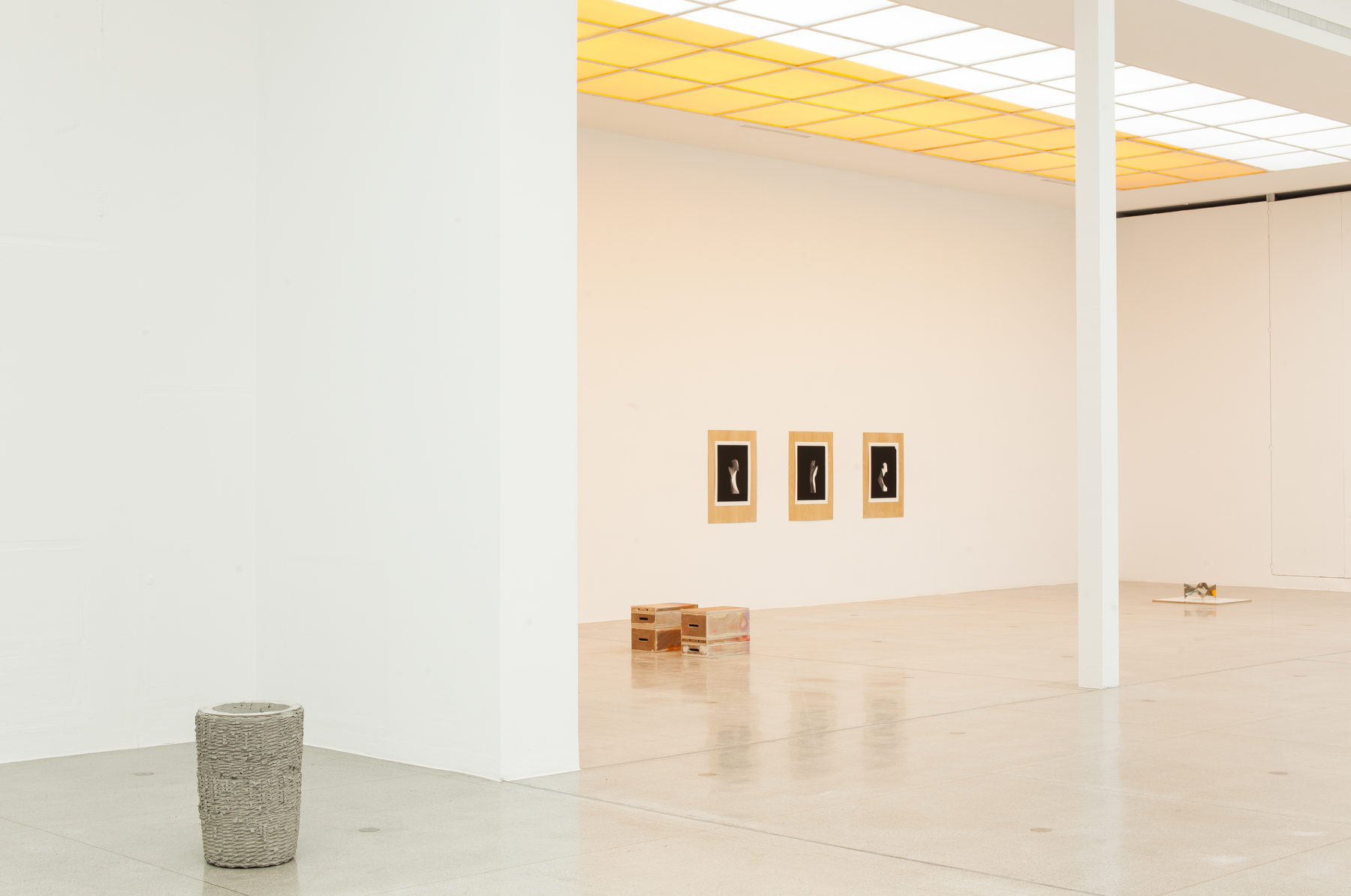 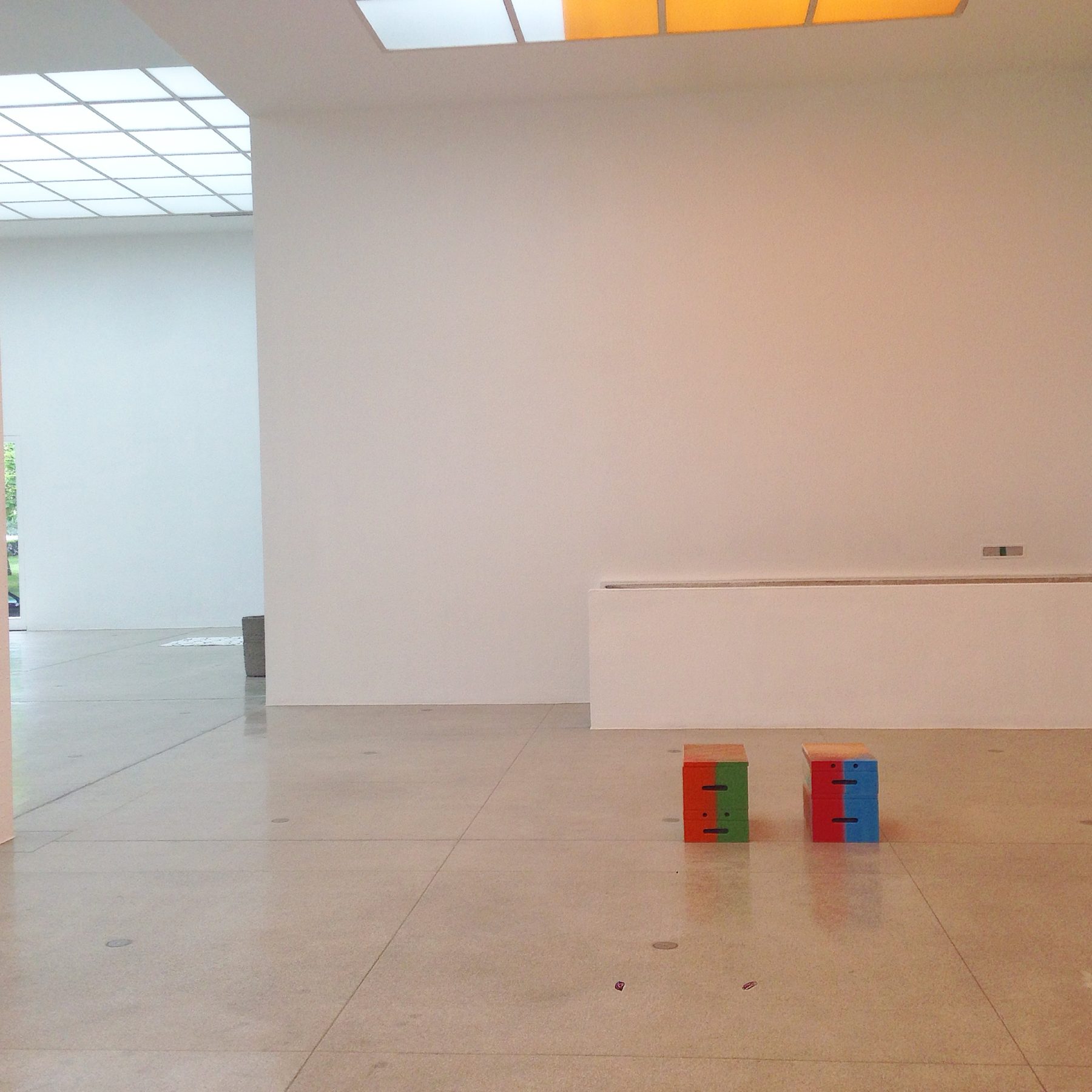 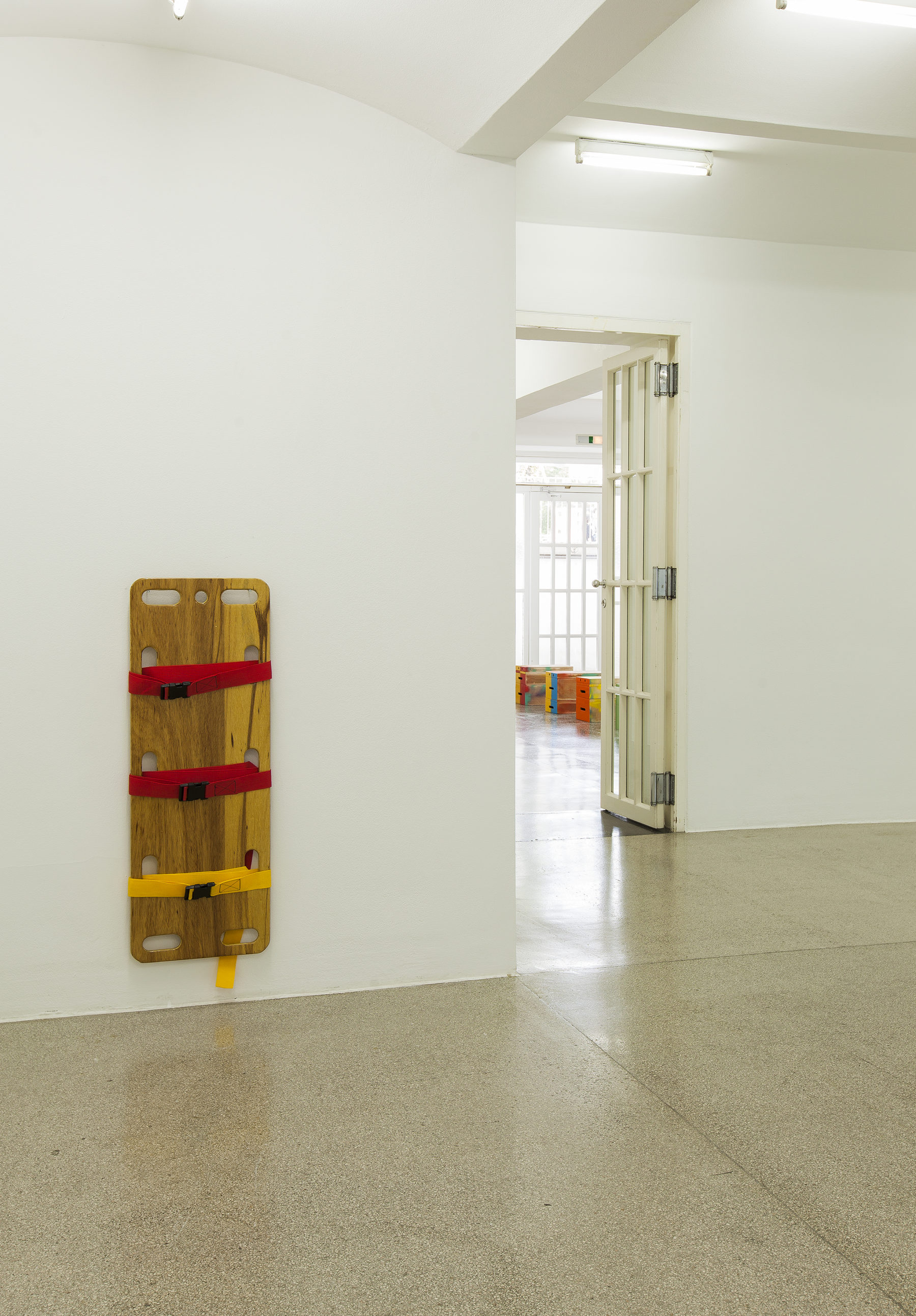 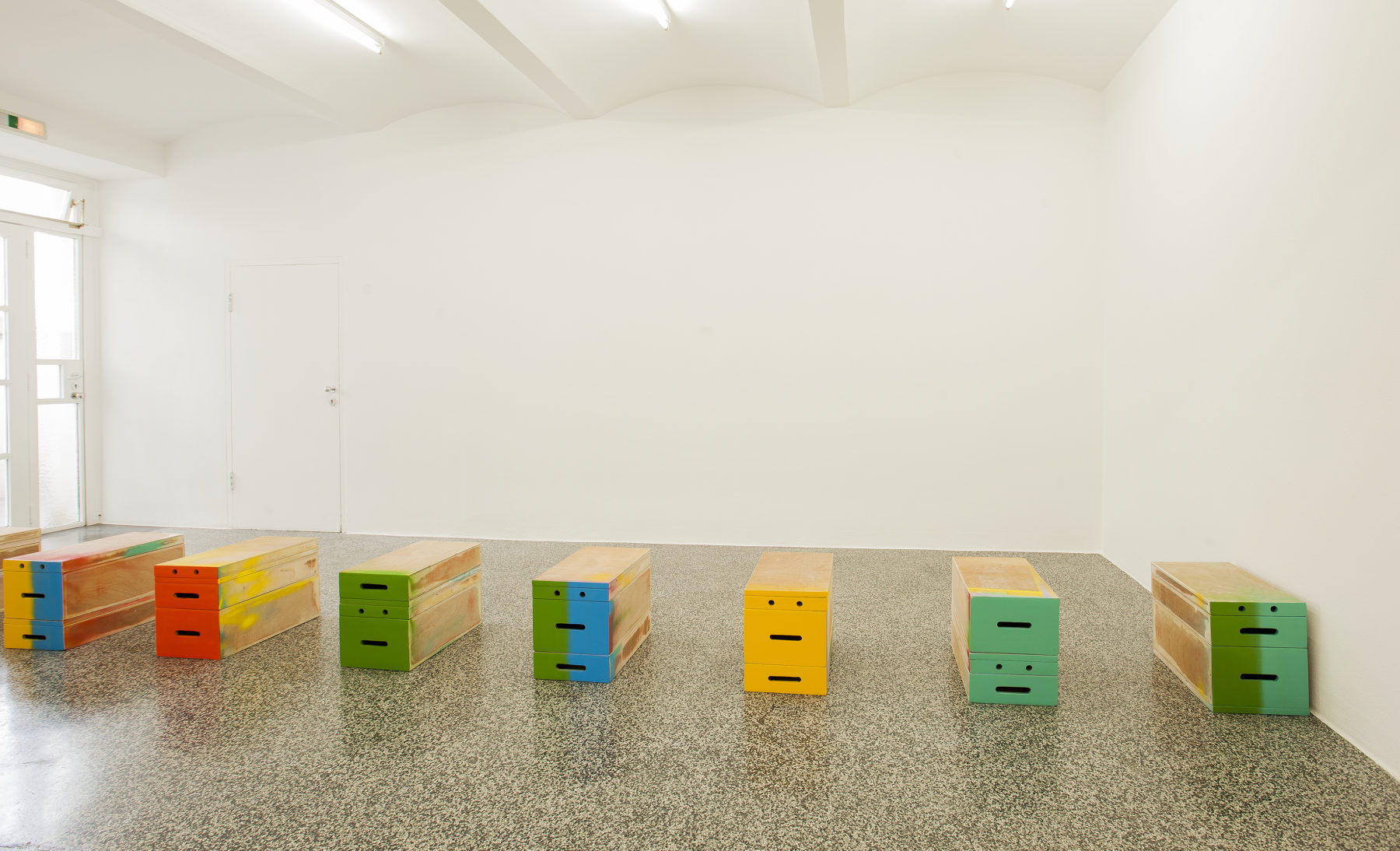 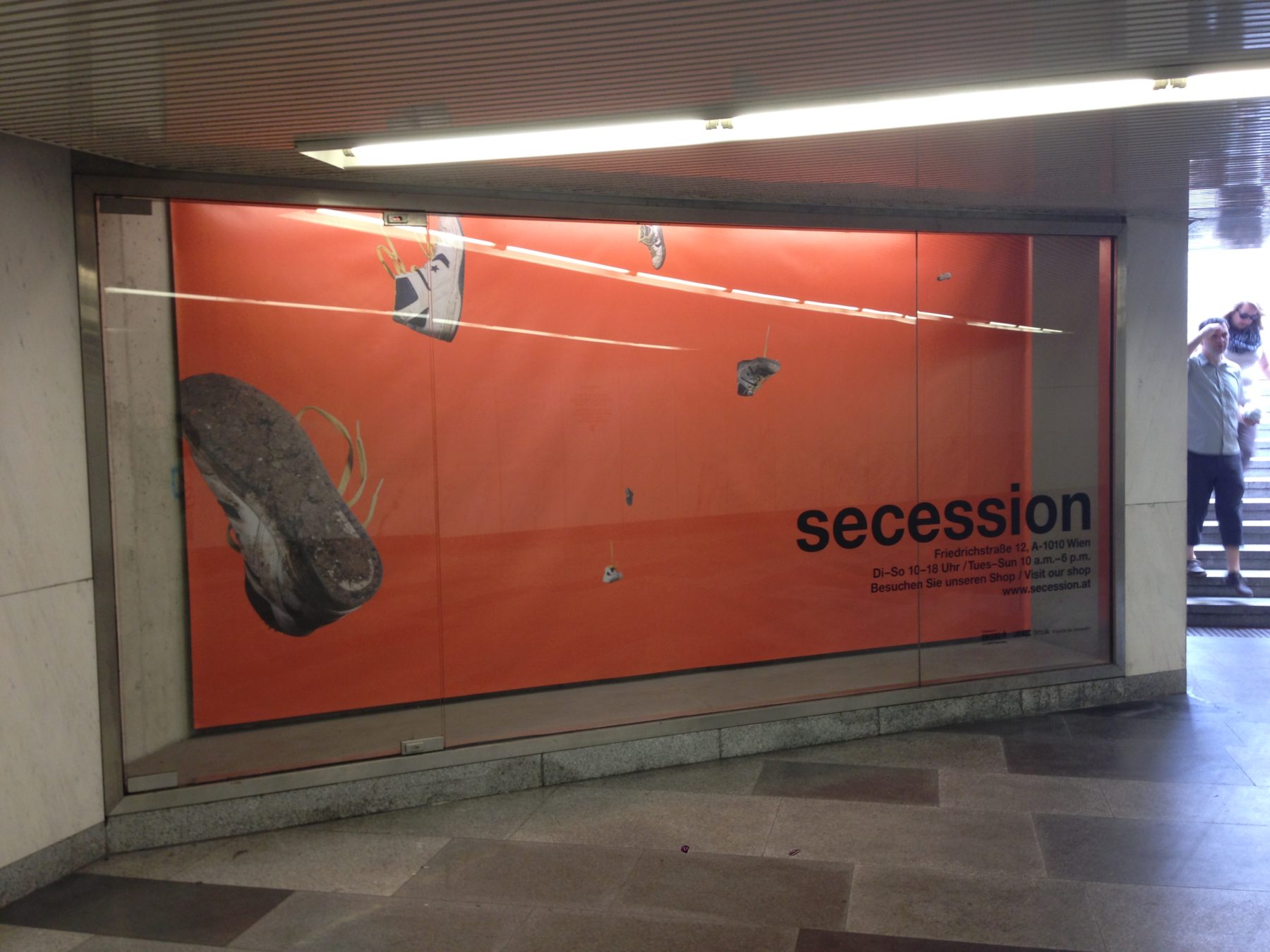